As we look forward to the launch of Elton’s Farewell Yellow Brick Road Tour on September 8 in Allentown, PA, and all of the spectacle that is sure to come with it over the subsequent three years, we take a look back at the costumes that Elton has worn on stage over the past five decades. 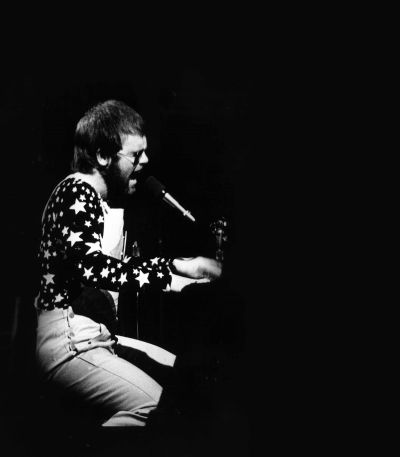 Elton making his American debut at the Troubadour in Los Angeles: August 25, 1970.

For the first few years of his performing career, Elton’s stage wear was store-bought. Starting with his debut in April 1968 and carrying on beyond his first shows in America in August 1970, the go-to outfit for the time was denim overalls (long or short-legged, depending on the circumstances), in a variety of “mod” colours. This was accompanied by a lightweight long-sleeved t-shirt underneath – it was black with embroidered white stars at at least one of the Troubadour gigs. His boots were bought at Gohill's in Camden, North London.

As Elton’s career and stage show progressed through 1971, including his first tours of Japan and Australia, he began incorporating clothing and winged boots from the popular Mr. Freedom boutique on London’s Kensington Church Street. Fun fact: Peter Sellers, from Elton’s favourite comedy radio series The Goon Show, was another of the shop’s many celebrity customers. 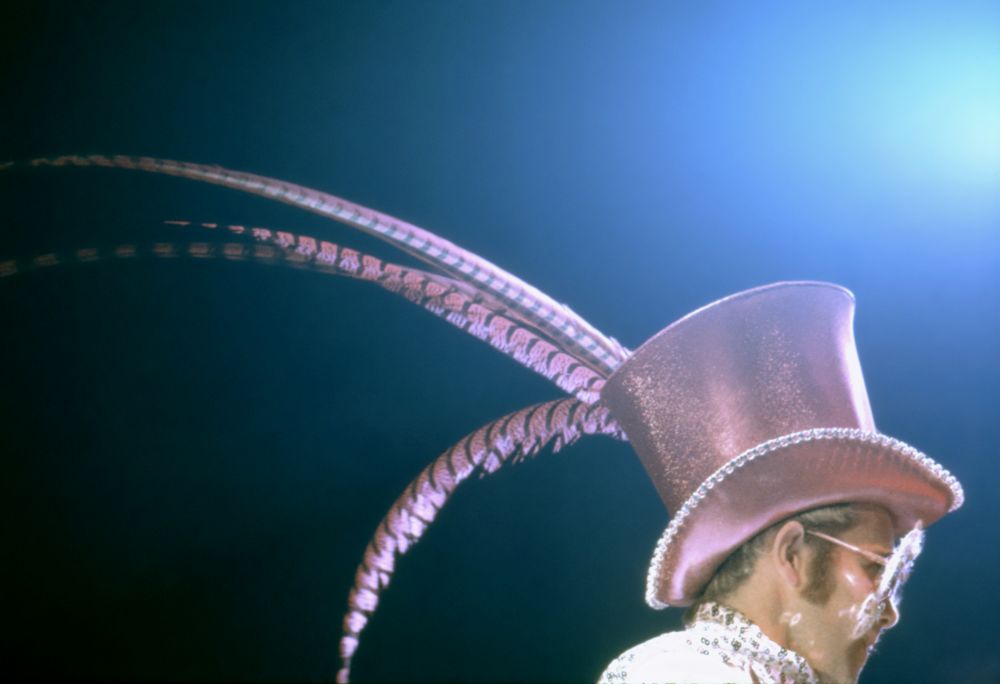 One of the first custom-made pieces of stage clothing Elton wore was made by his then-bass player Dee Murray’s wife, Anett, who had already sewn a multitude of patches all over one pair of Elton’s street-wear denim pants and jackets. “One time I made him a yellow satin cape with a big ‘E’ sewn on with sequins,” Anett recalls. “I think he wore it at the Royal Festival Hall in 1971. I was just so knocked out that he wore MY cape!”

Elton’s first dedicated professional stage costumer was Annie Reavey, who began their professional relationship by designing a dozen outfits for his 1972 tours of the US and UK. Her “Hercules” stage suit (with Elton’s self-selected middle name spelled down each pant leg and “Elton'' and "John" across the jacket front and back, respectively) was recently on display at the Rock and Roll Hall of Fame in Cleveland, OH. 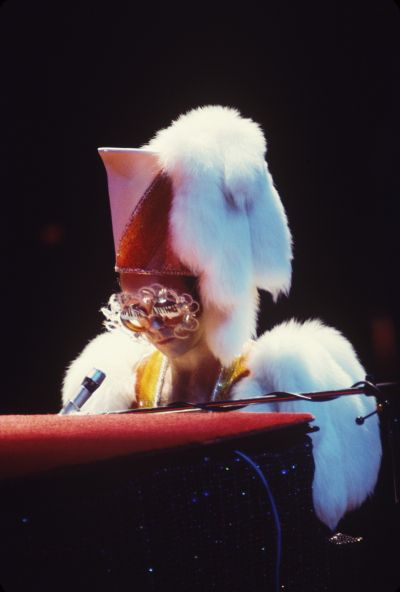 Starting in 1974, it was Bob Mackie who put Elton in many of his most iconic costumes: the sequined LA Dodgers uniform, the Donald Duck outfit used in Central Park, the “Amadeus” costume during the 1986 tour of Australia, amongst many others.

Elton originally approached the Los Angeles-based designer by asking him if he could create some outfits similar to the ones Mackie had been doing for Cher. The resulting multitude of sequins, feathers, boas, capes, and hats created a lasting visual identity for the rock star.

The late Bill Whitten, who also created some of Elton’s stage costumes, platform boots, and eyeglasses in the ‘70s and ‘80s at his “Workroom 27” shop in Los Angeles, is best-known for designing Michael Jackson’s signature looks, including the singer's iconic single white glove. 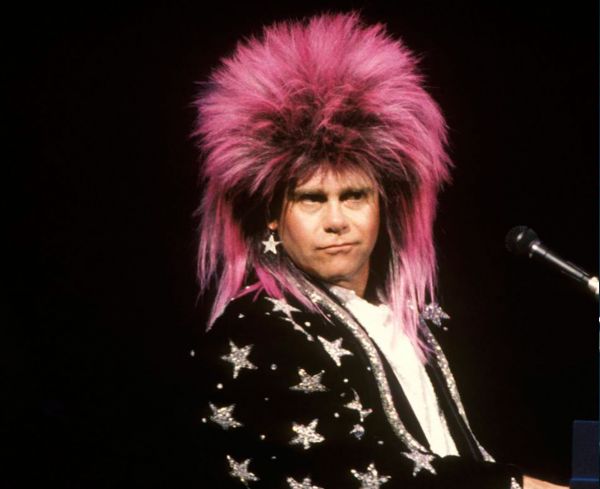 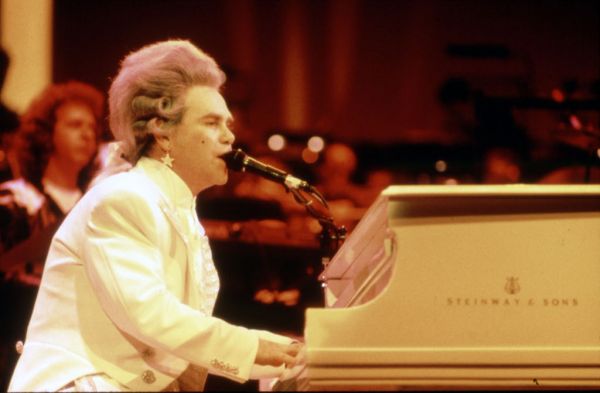 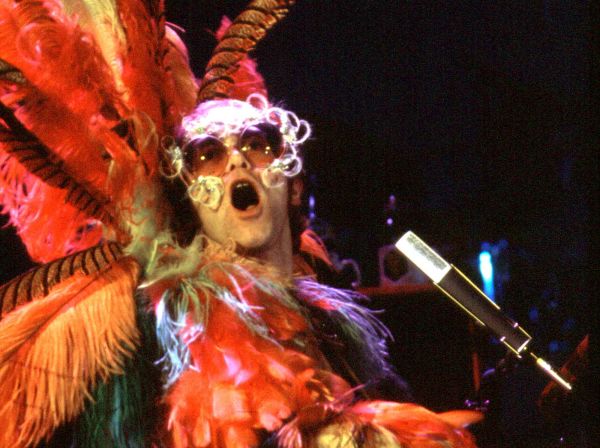 Tommy Nutter was one of the first designers to create both off-stage and on-stage clothing for Elton.

One of the Savile Row clothier’s classic suits can be seen on the cover of Elton’s first Greatest Hits album in 1974 and the alternating black-and-white paneled outfit Elton wore during his “Night and Day” concert at Wembley Stadium on June 30, 1984, was also designed by Nutter.

The answer to the question, “What is above over the top?” was revealed during Elton’s 1986 world tour when Bob Mackie returned to design a plethora of costumes, each more elaborate than the last. There were angel and devil designs…and everything in between. Some of the accompanying Mohawk wigs stood over 18 inches high. 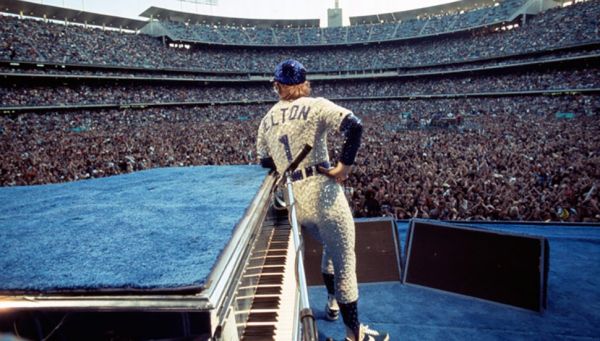 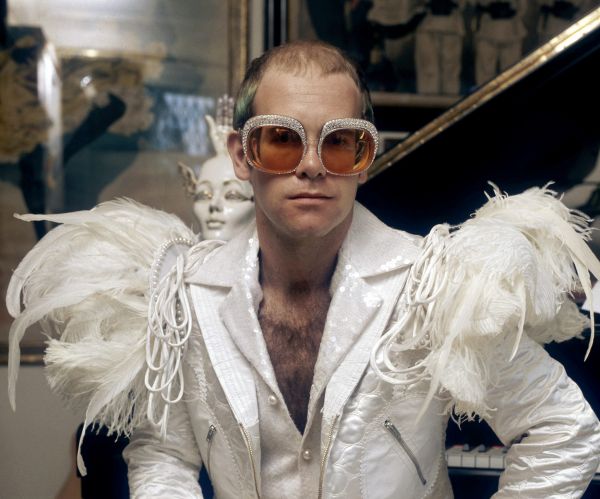 In 1992, Elton’s close friend Gianni Versace designed not only the album graphics for Elton’s The One LP but also pretty much everything for the accompanying World Tour, including Elton’s stage wear, the band’s outfits, and the stage design. Elton had never before, nor has he since, given one person such visual latitude. 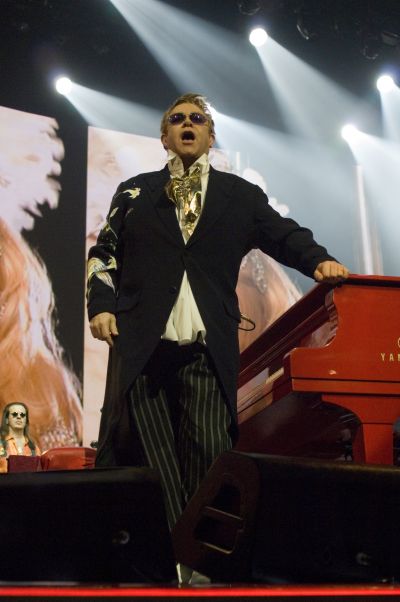 Elton wearing a Yamamoto on stage at The Red Piano – 2008. (Photo: Carl Studna)

Elton’s stage costumes between 2003 and 2010, including those for The Red Piano residency in Las Vegas, were custom-made by Japanese fashion designer Yohji Yamamoto, who began his design career in 1970, about the same time Elton’s own career was taking hold. 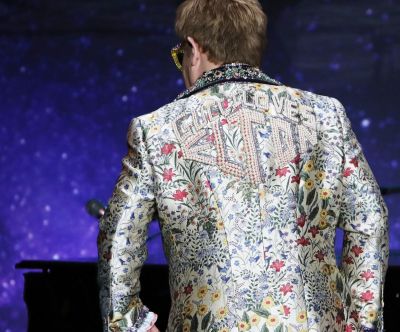 A Match Made in Heaven: Elton and Gucci 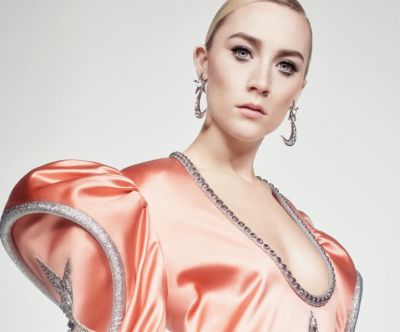 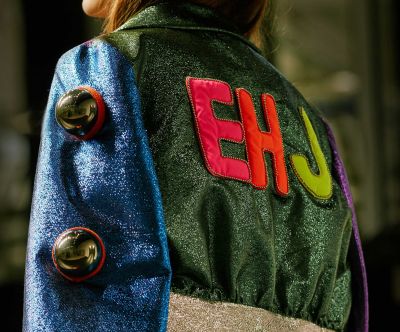