Vanderquest completely reconstructed the footage from scratch, first re-editing the camera rushes to match the original, then recreating all the graphics, restoring the footage to remove dirt and damage before colour correcting and grading the final version. The 16mm film rushes of I’m Still Standing were also used for the final scenes of Rocketman, with Taron Egerton as Elton rotoscoped into the footage.

With this incredible new version of Elton’s 1983 hit single now available we thought we would take a step back in time and present you with...

Ten Things You Did Not Know About the 'I’m Still Standing' Video, as told to us by its director, Russell Mulcahy.

On an early morning in June 1983, Elton was at the Carlton hotel in Cannes, France at the beginning of the music video shoot for his upcoming single, 'I'm Still Standing'. As he stepped onto the pier in front of the hotel... the director promptly fell off!

“I decided to film first Elton walking down the pier outside the Carlton,” recalls Mulcahy. “I’m [using a] hand-held [camera] and I’m walking backwards and I end up falling backwards going off the pier. Elton's singing away and...‘woahhh!’! Off I go. We were trying to go a little too fast at that point. You shouldn't do that at the end of piers.

“I had a leather jacket on – it was a little chilly because it was early in the morning – and I come up [to the water’s surface] and an assistant cameraman is diving in. He comes up, ‘I found the camera!’ I'm trying to get onto this pylon which is covered in moss and is very slippery! Eventually, I'm dragged out and taken through the lobby of the Carlton Hotel like a wet rat. I go upstairs, totally depressed. I'm like, ‘Oh my God, what's happened?’ Elton and Arlene [Phillips, choreographer] come up and say, ‘Are you okay?’ And I think I jokingly said, ‘I'm still standing,’ at which point Elton laughed and said, ‘Well come on, let's all just go downstairs and be fabulous.’”

The damaged film has been found.

“I participated in helping find the I’m Still Standing footage [for use in Rocketman]. One can was labeled ‘Water damaged’! I imagine that's the 35-millimetre film. So, it might actually still exist – it hasn't been processed. Maybe it's still okay even if it is water damaged; film restorers can do wonders these days. It’s got a shot of Elton… and then the camera going, ‘woahhh!’.”

The opening shots were an homage to a popular movie series. ”John… Elton John.”

The circle effect that begins the video and the establishing shots of Elton driving through southern France were a tip of the martini (shaken, not stirred) to the 007 movies’ opening sequences… right down to the very first sliding-and-expanding circle effect. Says Mulcahy, “The helicopter shots were very James Bond.”

The cane-catch was a first-take… and you will never guess who threw it!

One of Russell’s prior video collaborators happened to be in the same hotel during the shoot. “That afternoon, when we shot the cane being thrown in and he grabs it and does that extraordinary walk down the promenade of Cannes, a couple of members of Duran Duran turned up: Simon Le Bon and I think Nick [Rhodes]. It was Simon Le Bon who threw the cane. That all just organically came together.”

The entire video was shot in two days.

After Russell had dried himself off and a replacement camera had been found, “We went back down and had the most extraordinary two days. We didn't stop filming. If the cameraman, Nick, got tired or had to go to the toilet, I would film. It was all boom-boom-boom: Elton would be off getting costumed and I'd be shooting other things, like the traffic cops or the beach frolicking stuff, and then he’d come back in a different costume. On day two he was down there serving coffee to everyone in the morning!

“We were lucky that they drive on the other side of the road there, so we were able to get Elton and the Carlton framed in the shot with the cameraman in the passenger seat. Everything seemed to work quite well. We just kept filming, waiting for someone to tell us to stop… and no one did. I think they were loving it – they had Elton John out on the promenade!

“It was rarely two takes of anything. Everyone was so in tune. The pace was extraordinary. We did so much it was like, ‘bang-bang’. I think by that accident happening on the first day, everyone just came up with the most incredible energy. The energy you see in the video was the energy on the set and behind the scenes; it was just total fun and comradery and creativity. Elton, or whomever, saying, ‘Let’s do this…’ For example, the 'Choc Ice Lives' on the clapperboard – Elton asked for that… a fun code I guess.

“And he brought these cases of glasses, like 500 glasses. That’s why there are all those takes in the [singing] ‘Yeah, yeah, yeah’ parts.”

Mulcahy has his own “Hitchcock moment” in the video.

One of the preeminent music video directors of the time, or any time (he directed the very first video to be played on MTV: The Buggles’ Video Killed The Radio Star, as well as dozens of other iconic promos), can be seen in one of the sequences.

“At the 50-second mark, where Elton is very close to camera – right of screen – you see three dancers; I'm the one in the back with the leather jacket on. I'm dancing very badly. And then a couple of shots later you see Elton burst into laughter because he’s caught the fact that I completely screwed up the choreography. There’s an out-take where you see I’m turning my head the wrong way.”

The boy in the car was an onlooker.

“We didn’t cast anyone. I believe we just went out to some parents that were standing there and said, ‘We'd love to have your son in the video.’ He was wonderful. We put him in the Rolls and with the cap and just said, ‘Do that…smile…tilt the cap down…’. The parents were very happy to have their young son in an Elton John video.”

'Strictly Come Dancing' and 'Dancing With the Stars' judge Bruno Tonioli was a featured dancer.

“I think that was one of the first times Bruno was in a video… and he became this major celebrity! He’s one of the cops at the beginning doing the twirls, showing directions, and the one who gets the gold dust from Elton. He dances to Elton’s left in the promenade sequence and you’ll see him in one of the shots with me when I screw up.”

Russell shot and edited two videos in less than a week.

“Near the end of the video when Elton goes to that other room with the statues? That’s the Le Negresco Hotel [in Nice]. We shot most of the video outside the Carlton and on their beach, using their chairs and umbrellas and all that, but a couple of those shots in the evening and at night, like the car with all the people on it, were at the Negresco. It was around 3:00 in the morning. I mean when we say a day’s shooting, normally a video is 17-hour days.

“And then the next day we all get on a plane and go back to England, get on a bus and we get down to the location and we start shooting I Guess That's Why They Call It The Blues. We film till dawn. And I’m collapsed at the finish. And [my team members] say, ‘You look like death but anyway you have to get to the airport,’ so they pick me up and I get in a car and I’m taken to the airport and put on a plane to fly to Australia, which in those days is like 29-hour flight or something.

“So instead of having a restful weekend I went in and edited I’m Still Standing and I Guess That's Why They Call It The Blues. And then on the Monday I went straight into pre-production of my first feature film, Razorback!” 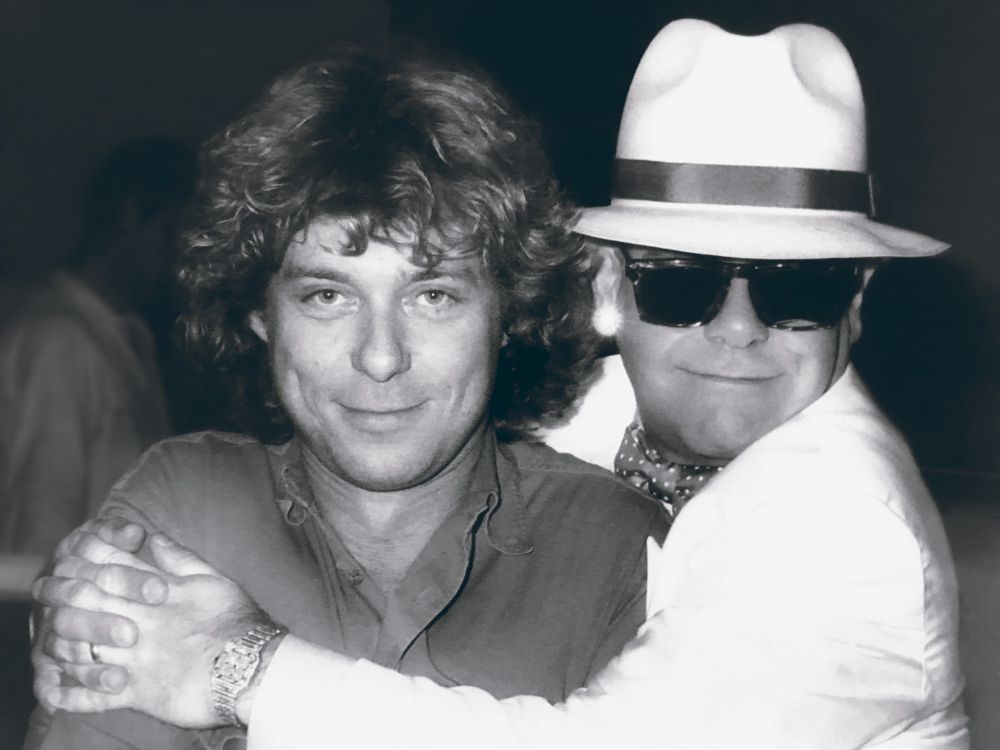 Russell and Elton in the 1980s. (Photo courtesy of Russell Mulcahy)

The video, which helped to re-establish Elton on the pop charts, is featured in the new film Rocketman, much to the delight of the Australian director.

“I’ve seen Rocketman three times and I love it more every time. It is, without a doubt, extraordinary. Taron is wonderful. The story, the choreography, the direction… everything. It’s up there with the greats – West Side Story and it definitely has the fun of Grease but it also has got great pathos and tragedy. Great combination. It’s bringing back the musical in just a joyous way.

“A lot of people are commenting on Taron [Egerton] doing the singing. It was totally the right choice. Because he acts the lyrics. And you still feel Elton 100%; Taron captures Elton magnificently.”

“I’m Still Standing is one of my favourite videos that I did. One, because I forged a wonderful friendship with Elton. We became best of mates and carried on making videos. He's just the most extraordinarily generous person.

“And two, it’s just a fantastic song. It just seemed to surface at the right time in his career. And it’s so powerful in the movie, too, when that song comes in. It sends such a clear message that anyone can have a fall and you get back up.

“I’m personally proud that video is in Rocketman. I'm very happy for Elton and everyone involved, Taron and Dexter [Fletcher, director], in the making of it. Congratulations and bravo. And I'm just super-super chuffed and stoked that my video is at the end. It's very emotional for me.” 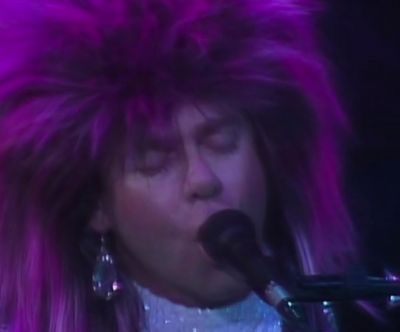 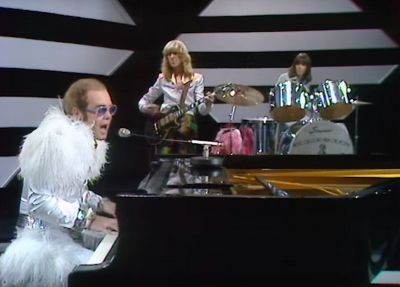 Watch a rare 1973 performance of 'Step Into Christmas' 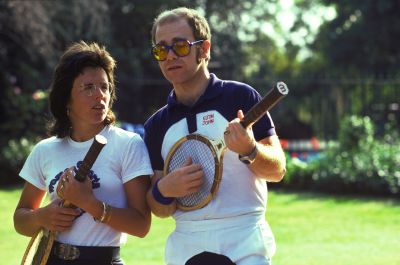