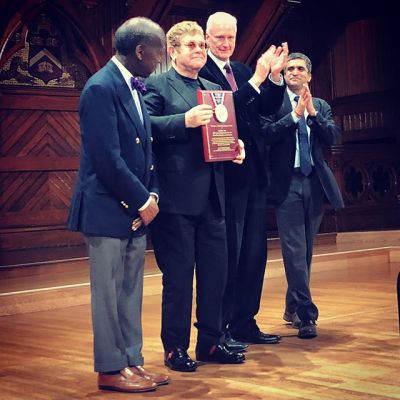 At a presentation in Harvard University's Sanders Theatre on Monday, November 6, Elton was named 2017 Harvard Humanitarian of the Year, recognising his work as founder of the Elton John AIDS Foundation.

In addition to receiving the award, Elton was entertained by the Harvard College Kuumba Singers performing a song from South Africa, with which Elton has a close affinity, and was presented with a bouquet of red roses by 9-year-old Chase Sullivan on behalf of the children of Cambridge, Massachusetts.

"For the past 25 years, I’ve had the privilege of raising awareness about HIV and AIDS and raising funds for organizations on the front lines of the epidemic," he said in his 13-minute speech. "The bravest and most passionate people I have ever met work for these organizations and so, first and foremost, I would like to dedicate this honour to the heroes who have devoted their lives to this work."

Elton was introduced by Dean of Harvard College Rakesh Khurana, who quoted the institution's mission and noted that “Sir Elton John is a living embodiment of that Harvard College mission statement. He has used his gifts and talents to serve the world.”

After noting Elton's humanitarian work beyond the EJAF, including the Elton John Scholarship Fund at the Royal Academy of Music and the Elton John Sports Fund, Khurana closed his remarks by quoting the final verse to Elton's Border Song (1970), keenly picking one of the very few lyrics that Elton wrote himself: 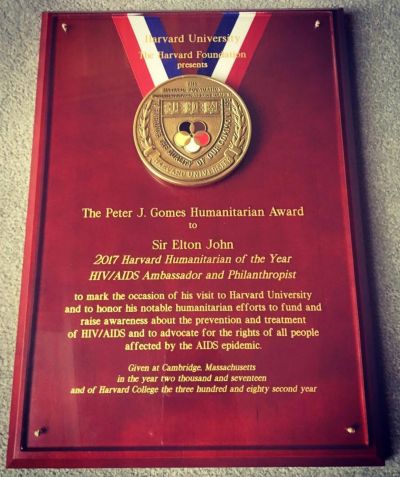 Past recipients of the Gomes award include gender rights advocate Malala Yousafzai, Archbishop Desmond Tutu, Lionel Richie, and Rihanna. This is not Elton's first award from Harvard. In 2013, the university’s School of Public Health also awarded him the AIDS Initiative Leadership Award in 2013 for his exceptional “vision, leadership, and courage” in the effort to end AIDS.

Elton paid rapt attention as three College students spoke about their honoree. As Skylar-Bree Takyi, Class of 2020, put it, "I was a year shy of being born when Candle In The Wind was re-released in 1997...but here I stand commenting on a career that is more than twice as old as I am.”

She explained that at the age of nine she was watching TV with her mother, flipping channels and stumbling across a documentary on the last few years of Princess Diana’s life.

“I picked up the remote to continue channel surfing only to be stopped by my mother’s hand. I looked at her and realized she was staring at the screen with eyes wide open and brimming with tears. I turned back to the television, trying to understand, and vaguely recognized a bespectacled face sit down at the piano and begin to put out words and music that I knew, even then, could only be described as 'heartsong'. My mother told me then the name of this man that had made her cry."

★  "[Things] were very conservative [growing up], as far as music was concerned. But then I heard Elvis Presley. And then Little Richard, Fats Domino, and Jerry Lee Lewis. That changed my life. I have very small hands – I would never have been a great concert pianist. Neither did I want to be a great concert pianist. I wanted to beat the shit out of the piano!"

★  "Today, my mission is to help other people embrace their own humanity and that of others – it’s the most powerful and positive force in the whole wide world. This isn’t just a nice theory; I’ve seen it first hand. Through my career and my humanitarian work, I’ve seen how people can be pulled together, united, and achieve amazing things as a result. The human spirit is the most powerful thing in the world, and when it embraces kindness and it does good things, then wonderful things happen."

★  "In concerts in Tel Aviv, I’ve seen Jews, Arabs, Christians, and Muslims all come together in the same spirit and appreciate the same music. From Moscow to Beijing to Mexico City to Johannesburg, I’ve seen millions of people of different ages, nationalities, political parties, and religions join together in celebration. And through the work of the Elton John AIDS Foundation, I’ve witnessed and participated in an amazing journey of progress against stigma, discrimination, and misinformation."

★  "Health care for the poorest and most vulnerable is under attack; unjust immigration policies are driving people underground and away from the health care and the services that they need. Racial injustice and violence are once again on the rise; the hard-fought gains in the civil liberties for LGBT people are being threatened; violence against transgender people is skyrocketing. All this is so deeply upsetting and I know how easy it is to despair, but I promise you, we can rise above it and lift people up, we can pull together, we can change the world and it all starts with embracing our common humanity. It’s the most powerful force on earth."

“This has been the most important lesson of my life; nothing is more profound or more powerful than recognizing our common humanity.”

Elton is given roses from 9-year-old Chase Sullivan on behalf of the children of Cambridge, Massachusetts. (Photo: Michael Kovac / Getty Images for EJAF)

The Elton John AIDS Foundation has raised more than $385 million to support HIV/AIDS programs since it was founded by Elton in 1992.

EJAF was founded in response to the urgent need for philanthropic support to address the global AIDS crisis and provide assistance to people living with or dying of AIDS. It continues to fight for the dignity and well-being every person deserves, combat stigma, prevent HIV infections, ensure universal HIV treatment for all who need it, and pressure governments to end AIDS. 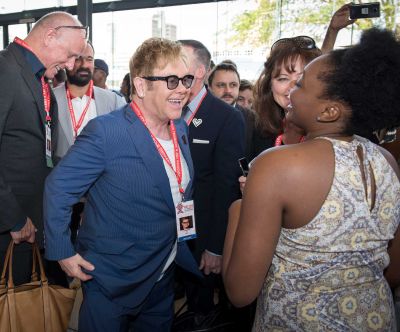 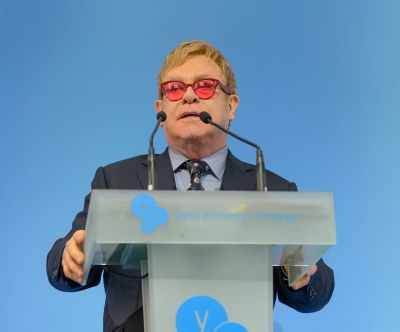 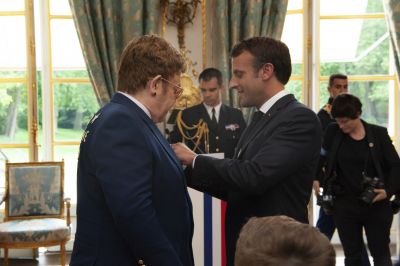