We've been digging out some classic Elton performances for Elton's YouTube channel and wanted to share the stories behind five of them.

Subscribe to our YouTube playlist to be notified when we upload a new live video every week.

Madman Across The Water – BBC Sounds for Saturday, London, UK: 1971

This was young Elton's opportunity to show what all the hubbub was about when he and his trio (still-current drummer Nigel Olsson and the late, great Dee Murray on bass) broke on the scene at the dawn of the decade.

This video was recorded at the BBC Television Centre on November 11, 1971 and broadcast on April 29, 1972 as the sixth episode of Sounds For Saturday on BBC2. Elton performed all but one of the songs from his just-released album, of which this is the title track, in front of a small studio audience.

The album Madman Across The Water, Elton’s 4th studio LP in the UK and 3rd in the US, was released in early November, 1971. It was Elton’s third effort that year: the live 17-11-70 and the movie soundtrack Friends having preceded it. Madman... reached #41 on the UK charts – Elton’s star was very much still waiting to rise at this point in his home country – and peaked at #8 on the Billboard charts, where it spent 51 weeks on the Top 200 and by 1998 had attained 2x platinum status in the US.

Madman... was the last of four albums Elton recorded at the famed Trident studios in London’s Soho area. The title track was recorded on August 14, 1971, one of three songs laid down that day, and was ingeniously orchestrated by the late Paul Buckmaster. Current Elton percussionist Ray Cooper and guitarist and Davey Johnstone performed on the recording (this began Davey’s decades-long association with Elton) and keen-eared observers will note other notable artists on the track: Chris Spedding on guitar, Herbie Flowers on electric bass, and Rick Wakeman on organ.

This BBC version of the song has just the three musicians, Elton, Nigel, and Dee, doing the work of many and establishing their own imaginative and improvisational style upon Elton’s material. Never before had piano, bass, and drums sounded so large and heavy – but they could also do light and delicate, as shown starting at the 6:24 mark of the video. Elton’s tremendous syncopated piano work, coupled with an intricate rhythm set by Nigel, and Dee’s near-orchestral bass playing, results in a head-spinning blend of singer-songwriter/prog rock/jazz improv that leaves the viewer both wiped out and invigorated by the end of the almost 11-minute journey.

FUN FACT: Elton has performed over 30 times at the BBC Television Centre, most recently on Later... with Jools Holland in November 2004.

On December 22, 1973, Elton appeared on Gilbert O'Sullivan: Welcome To My Show, joining him for his hit Get Down and making a cameo appearance on the show-closer Where Peaceful Waters Flow. But here, he and his band take over the studio stage for a rendition of their holiday single: Step Into Christmas.

Written and recorded on November 11, 1973 at Morgan Studios in London and released on November 23, the single reached #1 on the Billboard Christmas Singles chart and #24 on the UK Singles Chart, where it remained into mid-January. Interestingly, it has since returned to the UK chart seven times since 2007, reaching its all-time peak position of #10 on January 3, 2019 – becoming his 46th UK Top 20 hit a full 46 years after its first release.

The audio of this Gilbert O’Sullivan show version, which was issued as part of the December 2018 digital single of Step Into Christmas, is a blend of the original studio track (mixed down to mono by producer Gus Dudgeon, softening the “(Phil) Spector effect” throughout) and a new vocal recorded in the studio for this specific performance. This method was the norm for “live on television” recordings at that time, and well beyond. To sum up, the musicians are miming playing their instruments and Elton is singing live to his re-recorded vocal, but the question remains how much of his live voice we are hearing.

Another bit of trivia on this video, which had been hiding in a box or tape cannister somewhere in London for many years after it was first broadcast, is that it is lyricist Bernie Taupin who is "playing" the tubular bells and shaker. The original percussionist, Ray Cooper, was not in attendance on the day, so Bernie stepped in – just as he did when the promo video for Step Into Christmas was filmed at Morgan Studios a month earlier.

A word must be said about Elton’s wardrobe in this video. A Bob Mackie special, it is the same outfit that Elton wore as he began his infamous concert at the Hollywood Bowl on September 7, 1973. In the documentary that features that show, Elton can be seen walking down the stage steps in very grand fashion as the performance begins…with white ostrich feathers flying and his white satin jacket and trousers catching the lights just so.

Elton may have looked all sparkly and done up in his Bob Mackie outfit and neon Tina Turner wig on the evening of December 14, 1986, when this video was recorded at the Sydney Entertainment Centre, but in fact, he was going through one of the greatest struggles of his professional career at the time.

Elton noticed his voice was failing him earlier on the tour, one of the longest he had ever undertaken. As far back as September 1986, in New York City, Elton tried to refrain from talking during his off-stage hours…even going so far as to dress up as Harpo Marx (the silent member of the early 1900s comedy team) and communicate by writing on a small white board he carried around with him. But the condition worsened as he performed throughout the US and then Australia, leaving his vocals in a noticeably ravaged condition by the time this concert was broadcast live on Australian television and recorded for the future album, Live In Australia With the Melbourne Symphony Orchestra.

His difficulty is noticeable starting with the first line he sings in Rocket Man, a song from Elton’s 1972 album Honky Château. The first single from the LP, it was Elton’s highest-charting effort to date upon its release in April 1972, peaking at #2 in the UK and #6 in the US, and has become an almost brand name for the rock star: he has named record labels, management companies, and an upcoming film after it.

In this video, Elton directs his 14-piece band, the largest he has ever taken on tour, through a multitude of dips and curves during the song – folding in bits of Traffic’s Feelin’ Alright and the Beatles’ Hey Jude along the way.

Drummer Charlie Morgan and other members of the band came away from this concert thinking that Elton may have worried it was to be his last and thus was motivated to put everything he had into it, and viewers of this video would be hard pressed to argue.

Three weeks later, Elton had successful throat surgery at St. Vincent’s Hospital in Sydney and has performed over 2,700 concerts since then.

FUN FACT: The improvisational middle section of this performance lasts longer than the entire studio version of Rocket Man (4:42).

The album Captain Fantastic And The Brown Dirt Cowboy is a special one in Elton’s career. It was the first, and only, album in his catalogue to be recorded and mixed in running order. As producer Gus Dudgeon put it in a 1993 interview, it was, “…good fun doing it that way. Gave it a little extra sort of edge. It helped us to judge the next track by the track we'd just worked on, and it gave it a sort of natural momentum.”

The album also was another first: it entered the US charts at #1, something no album had ever done before in the history of the Billboard Top 200 chart. Elton’s popularity at the time was of such magnitude that the record stores Stateside pre-ordered enough copies to certify the album gold by the RIAA two weeks before it was released. It was certified 3x platinum in 1993, making it one of Elton’s biggest-selling studio albums so far.

Elton has performed the album’s title track intermittently over the years, including on his 1998 The Big Picture Tour. The band at this concert at the Wells Fargo Center in Philadelphia included John Jorgenson (Desert Rose Band, Hellecasters), who toured with Elton from 1995-1998 and continues to make guest appearances, providing mandolin accompaniment, and current Music Director Davey Johnstone switching back and forth between acoustic and electric guitars in the separate sections of the song. Current percussionist John Mahon, also providing backing vocals, is in just his second year on tour with Elton here. Other band members include Bob Birch on bass and backing vocals, Jack Bruno on drums... and the barely-seen Guy Babylon on keyboards and Billy Trudel on backing vocals.

The rendition of Captain Fantastic And The Brown Dirt Cowboy in this video is slower than it is usually performed in concert, and even a smidge slower than the studio version, which adds a poignancy to the autobiographical song’s reflective lyrics. “Hand in hand went music and the rhyme – the Captain and the Kid”, succinctly sums up Elton and Bernie’s incredible partnership like perhaps no other line and foreshadowed Elton’s 2006 follow-up album, The Captain And The Kid.

FUN FACT: Elton wrote the music for the song Captain Fantastic... on board the luxury liner SS France during its final voyage from the UK to New York City.

Elton brought all the emotions when he played the Amphitheatre Ephesus in Turkey during his solo Medusa Tour in 2001. On July 17, he played a 20-song set with every decade of his career represented, including this remarkable ballad from the 1972 album, Honky Château.

Mona Lisas And Mad Hatters, which has never been released as a single, expresses lyricist Bernie Taupin’s then-disillusionment with New York City and quickly became beloved by both fans and composer, who has called it “one of my all-time favourites”. Referencing two important works of art, one of which is represented in the Alice in Wonderland sculpture in Central Park, and giving a shout-out to Ben E. King’s 1960 hit Spanish Harlem, Bernie’s words are given one of Elton’s most modest piano accompaniments and emotional vocals in this performance during the Tuesday Turkish evening.

The concert at Ephesus was webcast live and considered so stunning that it was chosen for release on home video later in the year, also appearing on the Dream Ticket DVD collection in 2004.

FUN FACT: Mona Lisas And Mad Hatters is the only song that appeared on both Revamp and Restoration in 2018, with covers by The Killers on the first album and Maren Morris on the second. 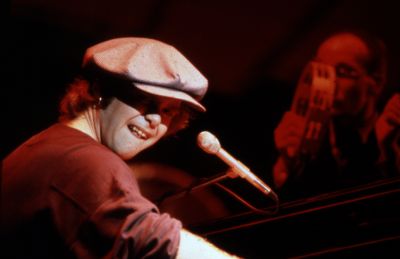 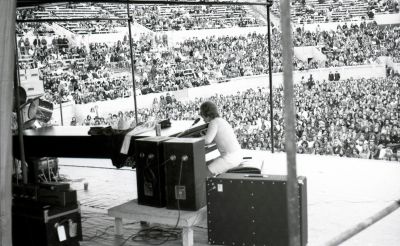 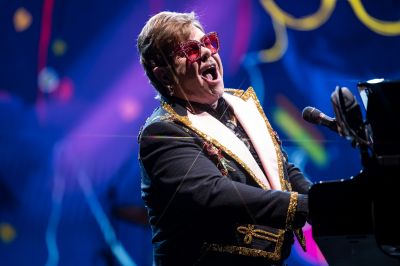 Watch: Elton's first show Down Under