This article was first published in August 2000, on the original EltonJohn.com. It was migrated to the current website in May 2020, to celebrate the 20th anniversary of Elton's first official website.

Twenty-five years ago, a surprise trip was planned that would remain embedded in the memories of the lucky travellers forever.

Elton chartered a plane to carry his entire office staff, their partners, parents and friends, as well as a film crew and various celebrities, to travel to Los Angeles and see him perform at Dodger Stadium, home of the Los Angeles Dodgers baseball team. 110,000 people would come and see the two shows, on October 25 and 26, 1975, the first in that stadium since The Beatles played there in 1965.

Two people who were there, Elton's former fan club secretary Linda Mullarkey, and record producer Gus Dudgeon, relive their memories, especially for eltonjohn.com. Photographer Terry O'Neill captured the event visually as nobody else could.

It all began with my two friends Marie (who worked in Rocket's press office), Eammon (Rocket's messenger/runner) and I, deciding that we'd love to see Elton in America. We'd seen him so many times in England and we knew the American audiences were fantastic and we just had to go.

In August 1975 we went into the office of John Reid (Elton's former manager) and asked if he would lend us the money for the fares and deduct it from our monthly salaries. He wrote out the cheque for the airfares there and then.

The next month the whole office was invited to lunch at Montpeliano restaurant in Knightsbridge, and Elton announced that he was taking us all over to see the shows at Dodger Stadium. Of course, everyone was extremely excited.

Marie, Eammon and I had already booked to go for two weeks, and we thought we'd go to the airport in style so we hired a Rolls Royce to take us there. It cost around £50 which was quite a lot of money to us, but it was a bit of a waste of money because we were leaving London at 4 am and no-one really saw us getting out of the car at Gatwick!

As we went out a week before everyone else, we went to Elton's show at Oakland Coliseum. It was made all the more exciting because we were allowed backstage and after the show, rushed into a black stretch limousine with Terry O'Neill (photographer) and a police escort. I remember sitting in the back of the limo listening to a radio station playing Funeral For A Friend as we were driving away from the stadium. 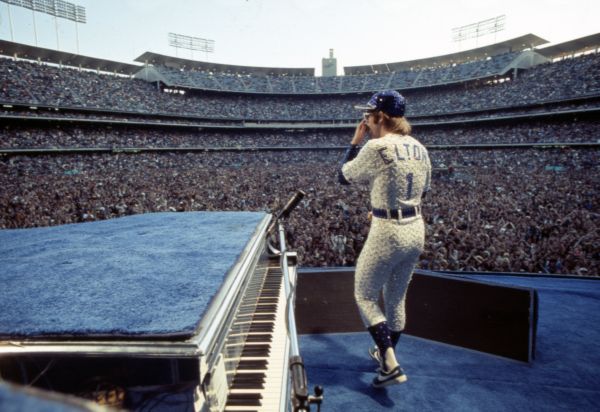 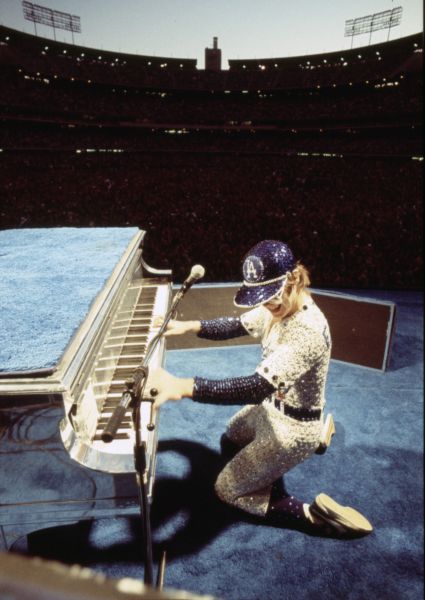 We did the usual sightseeing in the first week. We saw Marilyn Monroe's grave which is really just a plaque on a wall in Westwood. We also went to see the Hollywood Bowl where Elton had given some spectacular performances (with 5 mini-grand pianos on stage, each bearing a letter of his name).

Jumpsuits were the fashion then and we bought a jumpsuit each and had 'Elton John Tour 75' embroidered on the back costing $42.00.

A week later we waited at the airport one warm evening for the flight to touch down with all the people from the office on board. It was a Pan Am flight and everyone had Pan Am flight bags with lots of goodies inside. Russell Harty was on board because he was doing a documentary about the trip for London Weekend Television.

We all stayed at the Holiday Inn, Westwood. I remember ordering sherry trifle (one of my favourite puddings!) in the restaurant and the waiter asking for my ID (you have to be 21 to drink alcohol in California) and he said I couldn't eat the trifle because I was under-age (17 at the time).

The US office had organised loads of sightseeing for us. We visited Universal Studios, had a preview of the first Jaws film in a private cinema, went to Disneyland and had a trip on John's boat Madman (Across The Water) which was moored off Marina Del Ray.

We also visited Graumann's Chinese Theatre with all the film stars' hands and footprints. We were really spoilt and found it hard to believe we were really in LA. (I'd only been to Ireland and France before that, I'd never been across the Atlantic apart from a short spell in Canada as a baby). The week before Dodger was 'Elton John Week'. Everywhere you went the radio and TV stations were mentioning that Elton was in town. Elton was driven along Hollywood Boulevard in a buggy and he unveiled his own 'star' on the sidewalk.

Then came the day for Dodger Stadium. 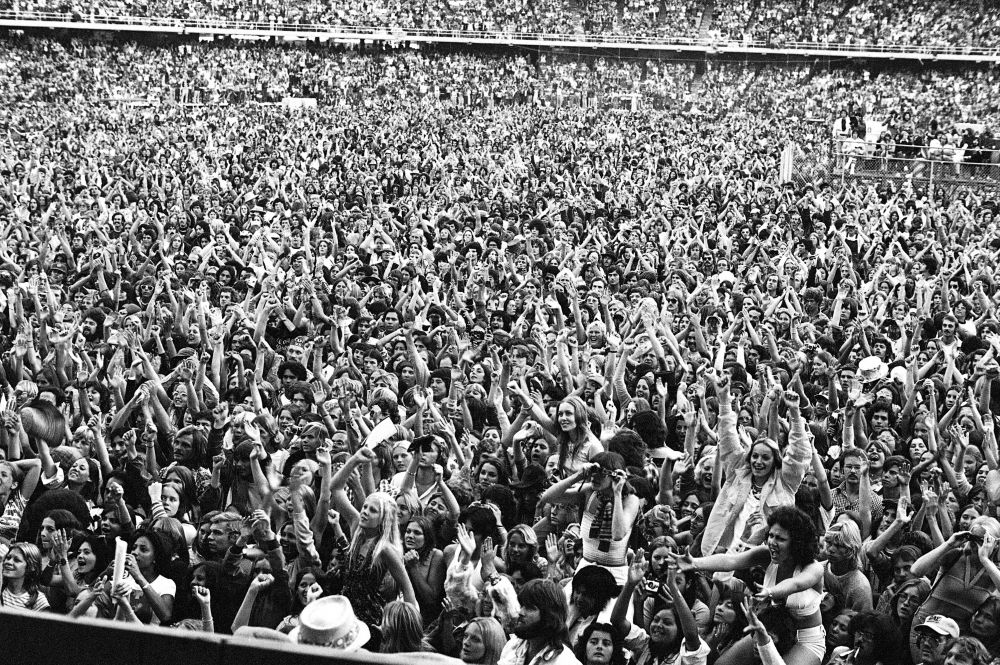 I can't really remember all the details - I think we got to the stadium at around 11 am. Marie and I waited at the gates so that we could see the band arriving in the limos. It was lovely and sunny, 55,000 people turned up to see Elton, The Eagles and Emmylou Harris. [Editor's Note: The Eagles didn't play this show - it was actually The James Gang, featuring future Eagle, Joe Walsh]

Elton came onstage dressed in an LA Dodgers outfit from Bob Mackie (who designed lots of Cher's outfits) and the crowd went wild!

Backstage there were celebrities: I remember Cary Grant, and Billie-Jean King (who went on stage with Elton to sing Philadelphia Freedom).

Marie and I went to the hospitality area upstairs at the back of the stadium to watch the show (we couldn't find Eammon) and we didn't like it much as we were too far away from the stage. So we went with all the fans in front of the stage and had the best time dancing and singing. We just stood there and couldn't believe that Elton had paid for us to be there, we both had tears in our eyes. One of the photos from Dodger shows Elton looking out onto the crowd and you can see us right in the middle!

After the show we all went to the Le Dome restaurant for a celebration party. I drank far too much tequila, Kahlua and cream and was very ill!

"The first thing I have to say, is that the stage outfit Elton wore for Dodger Stadium was the best he'd ever had. It was an absolute killer, just perfect", says Gus Dudgeon.

Gus went on the Pan Am flight with his wife Sheila. He still remembers the atmosphere on the plane: "It was cheerful all the way, everybody was on a real high, meeting other people's wives, girlfriends, mums and dads, and the celebrities who came with us. You have to realise that many of the people on that plane had never been to America before, and to go for the first time under those circumstances was quite something!"

The group stayed at the Holiday Inn, Westwood, an area which Gus knew was the student area of Los Angeles and, "a particularly cool place to stay."

He attended both the Dodger Stadium concerts, and managed to 'record' some of the shows on his video camera, though unfortunately in those days video cameras did not have a facility to record sound! He still remembers all the celebrities backstage. "I've always been amazed at the wide range of celebrities who really like Elton's music. I was watching Cary Grant standing talking to a group of children, very relaxed, just chatting to them. I had seen him several times before in his green open-top Bentley, sweeping around Rodeo Drive in Beverley Hills, and here he was, backstage at Elton's concert, chatting to the children. I just thought, 'how cool, Cary Grant likes Elton John".

Gus watched the show from behind the stage, so he was perfectly placed to see both what Elton was doing, and the response of the audience. "The vibe was stunning", he says, "it was a massive crowd, and although I had seen Elton play to large audiences many times, this was clearly very special indeed, much bigger than I had realised. There is one picture from that show which sums it all up. It was used on a poster, and it shows Elton in that fantastic costume leaning towards the audience. The weather is perfect, and you can tell that a connection has been made between him and that huge audience. It's in the way he is standing, in the look of the crowd. 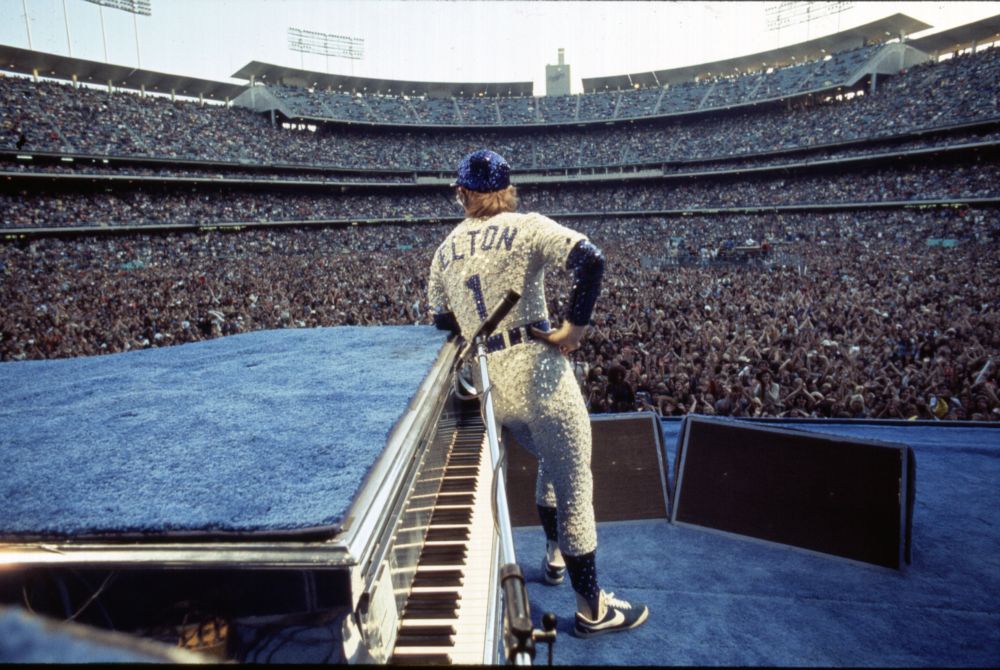 A photo that needs no introduction (Photo: Terry O'Neill) 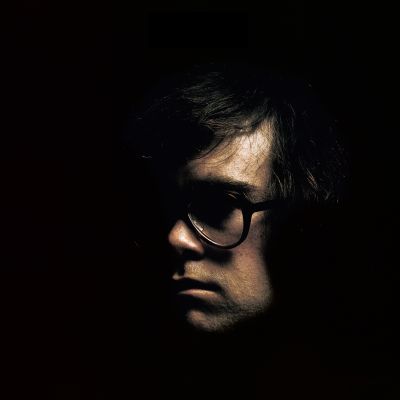 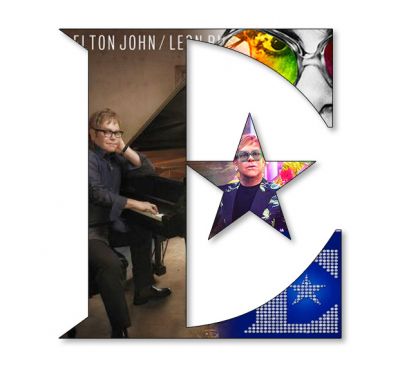 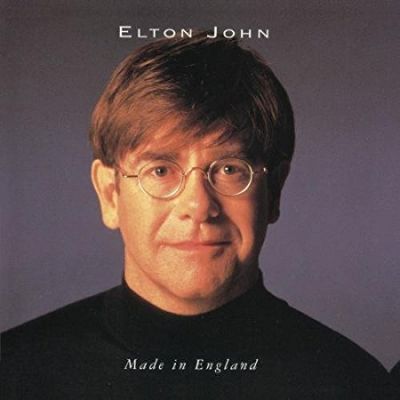